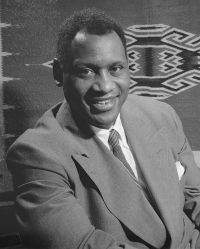 Paul Leroy Robeson was an American bass baritone concert artist and stage and film actor who became famous both for his cultural accomplishments and for his political activism. Educated at Rutgers College and Columbia University, he was a star athlete in his youth. His political activities began with his involvement with unemployed workers and anti-imperialist students who he met in Britain and continued with support for the Republican cause in the Spanish Civil War and his opposition to fascism. In the United States he became active in the civil rights movement and other social justice campaigns. His sympathies for the Soviet Union and communism, and his criticism of the United States government and its foreign policies, caused him to be blacklisted during the McCarthy era.

Josh delves into the storied life of the bass-baritone singer, actor and political activist, and recommends some collections of his best recordings.