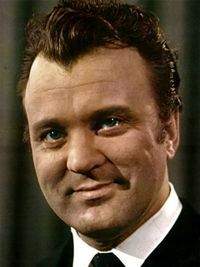 Born Harry Gustaf Nikolai Gädda in Stockholm on 11th July 1925, Gedda began his working life in banking before making his professional debut at the Royal Swedish Opera in 1952; after attracting the attention of Herbert von Karajan, engagements at La Scala and the Paris Opera soon followed, and his 1957 debut at the Metropolitan Opera marked the beginning of a relationship which would continue for several decades.

A hugely versatile singer, Gedda’s easy upper register and sweetness of tone won him particular success in high-lying bel canto roles such as Arnaud in Rossini’s Guillaume Tell and Arturo in I Puritani, and he also excelled in heavier French repertoire such as the title-roles in Massenet’s Werther, Offenbach Les contes d’Hoffmann and Gounod’s Faust.

Gedda continued to sing small roles well into his seventies, making his final studio recording in 2003; he died on 8th January 2017 aged 91.

Find out more at https://en.wikipedia.org/wiki/Nicolai_Gedda