The number of saxophonists - and jazz musicians in general - that have been inspired by the music of John Coltrane is too many to count, yet so few were lucky enough to spend time working with the man himself. Pharoah Sanders (born Farrell Sanders) spent much of his time in the mid-’60s working in John Coltrane’s band - right up until Coltrane’s passing in 1967 - as his band started to explore the sounds of avant-garde jazz influenced by the likes of Ornette Coleman and Sun Ra. Both Sanders and fellow saxophonist Archie Shepp drew heavily from their time with Coltrane in that period, something that’s very much audible on 1969’s Karma. While Shepp also took much from Coltrane ideologically, Sanders focussed primarily on his musical developments, namely his raw and expressive approach to the saxophone and his ‘sheets of sound’ technique of soloing. Even so, it was around this time that Sanders began exploring aspects of religion like ‘Tawhid’, the Islamist concept of oneness and monotheism, as well as ‘Karma’, a shared concept throughout many Indian religions like Sikhism, Buddhism, and Hinduism. It was also during this period that Sanders began to get more conceptual with his sax technique, stating in the liner notes of 1966’s Tauhid “I don't really see the horn anymore. I'm trying to see myself.”

By the time we get to 1969’s Karma, much of the cutting-edge jazz of the time had progressed past the abrasive and atonal sounds of what would now be called ‘free jazz’, embracing further sounds from non-Western musical traditions and religions; what is often referred to today as ‘spiritual jazz’. The heavy use of percussion in particular on Karma and slow mantra-like melodies certainly paint a very different picture than the more discordant sounds of Coleman’s Free Jazz from the beginning of the decade. Sanders wasn’t just playing with Coltrane during this time, though; he made significant contributions to his widow Alice’s A Monastic Trio and Journey in Satchidananda, as well as featuring on Don Cherry’s Symphony for Improvisers and Where Is Brooklyn?.

Nothing encapsulates the sounds of post-Coltrane spiritual jazz like the opening of the thirty-minute piece ‘The Creator Has a Master Plan’, opening explosively as Sanders leads the melody throughout the chaos. The piece soon after delves into more overtly spiritual territory as it settles into a more atmospheric section, and Leon Thomas enters singing the mantra of the ‘Creator’ before launching into an improvised vocal solo of his own. Influenced by his time spent with African pygmy peoples, Thomas’ yodel-like vocal technique lends his own voice an instrumental characteristic, too. Meanwhile, Sanders’ heavy use of extended techniques give Karma quite the cathartic spirit - listen out for the blistering overblown solo around the 16-minute mark as the record’s first half begins to reach its climax. Sanders and Thomas eventually clash towards the end of this segment, Thomas’ wailing technique blending with Sanders’ screeching horn as the two really start bellowing away. Thomas was another Coltranian disciple, not having played with the man himself like Sanders but sometimes dubbed the ‘Coltrane of Jazz Vocalists’. Another key collaborator for Sanders was pianist Lonnie Liston Smith (not to be confused with the late Dr Lonnie Smith), and it’s his rumbling keys that provide the backdrop to the most transcendental moments on Karma.

While ‘The Creator Has a Master Plan’ takes up the bulk of Karma, the more sedated ‘Colors’ offers a more calming coda to the record, and while Leon Thomas returns again for another swaying mantra he’s much more restrained in his delivery this time. Karma is one of the more enigmatic releases of late ‘60s free jazz, very much embodying the sound of late-career John Coltrane but pushing it further into wilder extremes. Progressing the genre aesthetically and conceptually past the free-for-all that was releases like Coleman’s Free Jazz, it was artists like Pharoah Sanders that shaped the identity of what spiritual jazz is known for today, even as far as modern artists like Kamasi Washington or Shabaka Hutchings. 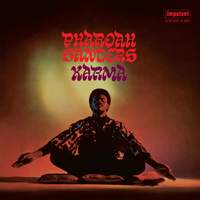