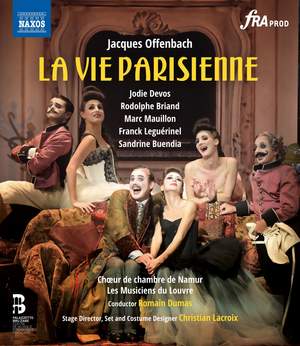 Jacques Offenbach had already achieved fame as an operetta composer by 1866, but that year’s premiere of La Vie parisienne was his first portrayal of contemporary Parisian life. With its tale of romantic intrigues, disguises and comic celebrations of the mad gaiety of life in the French capital, La Vie parisienne became popular in the nation’s theatres, but not after a hasty re-working of its final acts after protests from the original performers. With significant new musical discoveries and the final acts restored, this opéra-bouffe masterpiece now speaks for itself given the resources of a superb cast and Christian Lacroix’s colourful and much acclaimed Bru Zane France production.