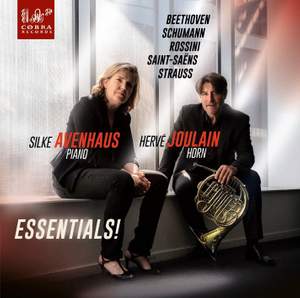 On this CD, Herve Joulain and Silke Avenhaus offer a romantic journey through the 19th century. If there are instruments that have left their mark on Romantic music, they are not to be found elsewhere than in the horn and piano.

The horn with the invention of the valves in the 19th century offering chromaticism thus helping the horn to sing like any other instrument, and the modern piano, which appeared at the end of Beethoven's life, with its double escapement keyboard that allows rapid note repetition and therefore more virtuoso playing. This precisely made it possible to express all the feelings that Romantic music demands of them.

The modernity of the piano is obvious from the earliest piece of this CD, Sonate op. 17 of Beethoven which seems to have been written exclusively for this new piano and whose horn part only answers the call. The second move reverses the roles and the expressiveness of the horn is solicited in this sort of slow march which, in this duet between Herve Joulain and Silke Avenhaus, prefigures what this romantic journey will look like. The piano announces, supports, anticipates, responds, blends in or stands out and, above all, remains the inseparable partner of this common expression of desire. What could possibly be more romantic ?

Thanks to his outstanding career, Herve Joulain has presented the horn as a solo instrument in 125 different orchestras. His remarkable career (several international awards) also brought him to perform in chamber music with, among others, Paul Tortelier, Pierre Amoyal, Vadim Repin, Michel Dalberto, Boris Berezowski, Boris Belkin, Pinchas Zukerman, Natacha Guttman, Yuri Bashmet and Gidon Kremer. Her approach to piano and chamber music, characterized by joy and creativity, has led to numerous distinctions by music critics such as the Diapason d'Or, the Supraphon Award, as well as earning a nomination for the Grammy Award.