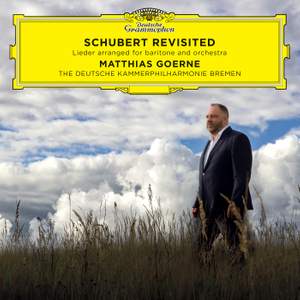 No. 3, An die Türen will ich schleichen (Arr. Schmalcz for Baritone and Chamber Orchestra)

Recording of the Week,  Schubert Revisited from Matthias Goerne

The German baritone is on top form in this recital of nineteen Lieder in bespoke orchestrations by one of his regular recital-partners Alexander Schmalcz, with the Deutsche Kammerphilharmonie Bremen responding to his simple eloquence in kind.

Matthias Goerne, one of the most high-profile Schubertians of his generation, has recorded a selection of Schubert’s songs not in their original versions with piano but in orchestral arrangements by Alexander Schmalcz, Goerne’s accompanist of many years’ standing. Goerne says about Alexander Schmalcz’s arrangements: “His creativity in adapting these songs for the orchestra is enormous, while his stylistic sensibilities and his subtle approach in deploying the right instruments at the right moment are truly astonishing.” “Schubert’s ability to empathize makes him one of the most important composers in the whole of human history. (…) He created “a perfect balance between intellectuality and the greatest naturalness. With Schubert, even the most complicated melodies and forms sound entirely natural.” (Goerne) And yet what we hear on this album is “pure Schubert”, Alexander Schmalcz insists. “I have added nothing. Sometimes I fill out the voices by doubling the octave, for example. Or I write sustained chords in the orchestra in order to simulate the sound-surfaces that are the result of the use of the sustaining pedal on the piano. But my goal is to be as original as possible.”

Schmalcz’s orchestrations never seek to gild the lily or to push the singer into a more operatic form of delivery - textures are beautifully uncluttered, leaving Goerne free to sculpt and colour phrases with the utmost subtlety and intimacy...In his insightful booklet-note Goerne writes affectionately of Schubert’s ability to strike ‘a perfect balance between intellectuality and the greatest naturalness’, and that same equilibrium is evident in every phrase of the performances here.

The boldest, most thrusting orchestral effects arrive in the supernatural drama of Erlkönig. Far from being dwarfed, Goerne simply expands his voice to match the new surroundings, to thrilling effect...Schubert Revisited, so imaginative and refreshing, is the perfect new year delight.