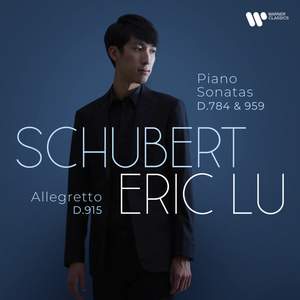 The opening movement of Schubert’s penultimate piano sonata, D959, is exquisitely shaped in this latest offering by Eric Lu, the impressive US pianist who won the 2018 Leeds International Piano... — BBC Music Magazine, February 2023, 5 out of 5 stars More…

“I love Schubert,” writes pianist Eric Lu. “It is difficult to describe how meaningful his music is to me. He was the ultimate artist, in the purest sense of the word. Late in his life, with death staring him down and all his hopes and dreams dashed … he continued to churn out one masterpiece after another. I have come to the conclusion that he is the composer who moves me most intensely.” Lu’s album of Schubert pairs two of his greatest sonatas – D 784 in A minor, written in 1823, and D 959 in A major, written in 1828, the last year of the composer’s short life; complementing them is the Allegretto in C minor D 915, dating from 1827. When Eric Lu won the 2018 Leeds International Piano Competition, the Guardian welcomed him as “one of the most exciting prospects in a long time … a veritable poet of the keyboard.” These words were borne out by the critics’ response to his first Warner Classics album, a programme of Chopin, Schumann and Brahms. International Piano magazine found it “truly magical”, while Fanfare welcomed “a gifted musician … who can probe the depths of the piano literature with poetic sensibilities and imagination.”

The opening movement of Schubert’s penultimate piano sonata, D959, is exquisitely shaped in this latest offering by Eric Lu, the impressive US pianist who won the 2018 Leeds International Piano Competition...A virtuosic final movement [of the A minor Sonata] confirms Lu’s place among today’s Schubertians.

His tone in the more reflective moments is striking; it’s a pearly, bell-like sound that, despite the performance being on a modern grand piano, reminded several members of the Presto team of András Schiff’s wildly acclaimed performances on a unique fortepiano from a couple of years ago, which achieved similarly magical sonorities.