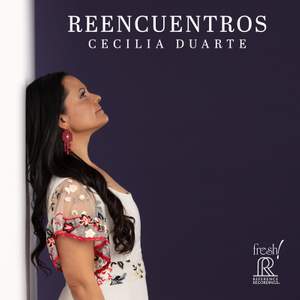 REFERENCE RECORDINGS is proud to announce Cecilia Duarte’s first solo album, Reencuentros (pronounced reenkwentros), produced by multipletime Producer of the Year GRAMMY® winner, Blanton Alspaugh. Cecilia is best known as a classical and opera singer. This album is a departure, containing 12 romantic boleros from multiple countries. Sung in Spanish, these Latin popular standards are truly art songs from the mid20th century. Cecilia is accompanied by Trio Chapultepec: Vincent A. Pequeño, Israel Alcala, and William Carlton Galvez, joined by Jesús Pacheco on percussion. Reencuentros was recorded in December of 2020 at Wire Road Studios, by engineer Andrew Bradley. Cecilia Duarte writes this about the origin of Reencuentros: “This album is a reencounter with my past, a remembrance of the moments when I listened to my mother sing many of the songs compiled here, and a reflection of who I am as an artist today… Reencuentros represents where I come from and the stories that formed me. It is important for me to share this legacy of beautiful music, only a small token of the artistic richness of Latin American music.”