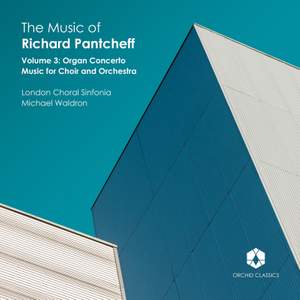 Pantcheff: For, lo, the days come

Orchid Classics presents its third volume of choral music by Richard Pantcheff in world-premiere recordings performed by the London Choral Sinfonia directed by Michael Waldron, with organist James Orford. This release again offers a wide range of interconnected works, centred around the

genres for which Pantcheff has achieved the most notable success: music for organ, instrumental ensembles and choirs.

Book-ending the disc are two Fantasias, originally composed for organ solo, here specially arranged by the composer for string orchestra and trumpets. At the heart of the album is Pantcheff’s Concerto for Organ, String Orchestra and Trumpets, a major new work commissioned by the London Choral Sinfonia

and Michael Waldron. The Music of Richard Pantcheff, Volume 2 went straight to number five in the Classical Charts and received a 5-star rating from Choir and Organ magazine