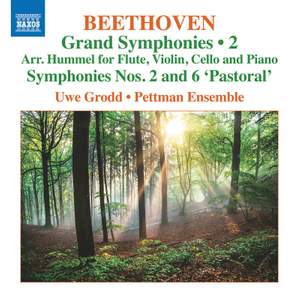 arranged by Hummel for Flute, Violin, Cello and Piano

I. Pleasant, Cheerful Feelings Aroused on Approaching the Countryside

II. Scene by the Brook

V. Shepherd's Song. Grateful Thanks to the Almighty After the Storm

Unless one lived in a major European centre with an orchestra, the opportunity to hear large-scale works by the great composers of the age was well-nigh impossible. The insatiable demand for new chamber versions of famed orchestral works saw Hummel arranging Beethoven’s Symphonies nos. 2 and 6 ‘Pastoral’ not long after the great composer’s death. Hummel approached his task with great care, bringing a fresh perspective to the works in his sensitive and compelling chamber music configurations. Hummel’s arrangements of Symphonies nos. 1 and 3 ‘Eroica’ can be heard on 8574039.