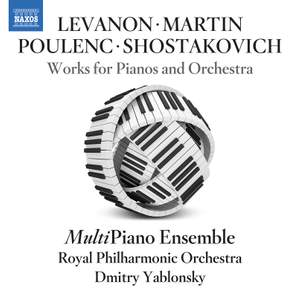 In contrast to the somewhat controversial arrangement of the Martin, the Shostakovich Concertino for two pianos, with additional parts devised by Lev for string orchestra sounds completely idiomatic,... — BBC Music Magazine, January 2023, 4 out of 5 stars (Performance) / 5 out of 5 stars (Recording) More…

Shostakovich: Concertino for two pianos in A minor, Op. 94

Concertante orchestral works for more than one keyboard instrument saw a revival after the First World War with the neo-Baroque trends of the time helping to revitalise the neglected concerto grosso genre. Recorded here in a new version with three pianos, Martin’s Petite symphonie concertante reflects the dark tensions of the Second World War, while Poulenc’s delightful Concerto for Two Pianos is infused with the spirit of Mozart in its rich and eclectic stylistic tapestry. Shostakovich’s Concertino, in a new orchestral version, shifts between superficial Soviet entertainment and heartfelt expressiveness, and the songs quoted in Aryeh Levanon’s Land of Four Languages symbolise a hope for peace and harmony in Israel.

In contrast to the somewhat controversial arrangement of the Martin, the Shostakovich Concertino for two pianos, with additional parts devised by Lev for string orchestra sounds completely idiomatic, and this beautifully blended performance serves the music most effectively.

This is a unique programme of music performed with great skill by a pretty unique ensemble. Technically the presentation is very good and I would certainly return to this disc for the Poulenc and Shostakovich.