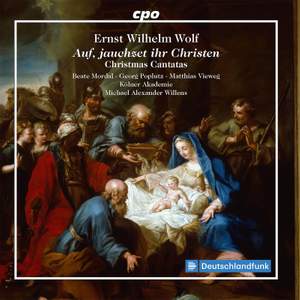 I greatly appreciate his [Matthias Vieweg’s] voice and his singing... I quite like her [Beate Mordal's] voice, which is very clear and strong and well suited to this repertoire... The orchestral... — MusicWeb International, December 2022 More…

In the 18th century, "well-stocked" church music was a natural tradition throughout central Germany: church services were embellished along the ecclesiastical year with cantatas appropriate to the liturgy for the glory of God, but also for the joy and "spiritual edification" of the visitors. From this treasure of hitherto unknown Christmas music, four cantatas by Ernst Wilhelm Wolf are presented for the first time on this recording. Wolf worked as court kapellmeister in Weimar, and the fact that Goethe rejected him as "self-indulgent" should not prevent us from admiring him as a very important composer of the transition. Musically, Wolf was greatly influenced by Carl Philipp Emanuel Bach in the empfindsamer Stil and by the works of the Berlin Kapellmeister Carl Heinrich Graun. He was also a prolific composer whose works were received with admiration by his contemporaries. The four cantatas show elements of the early classical and sensitive styles; the cantata choruses are often homophonic and songlike, polyphonic sections rather rare. All the cantatas prove to be individually conceived works that testify to the composer's mastery. Beautiful sounding arias, the naturalness of their expression and the dramatic compression in the individual movements are still convincing today. At the same time, the cantatas bear witness to the high quality of Protestant church music in the period after Johann Sebastian Bach and illustrate the high value of music within the liturgy. Today they can be a welcome addition to the repertoire for the Christmas season.

I greatly appreciate his [Matthias Vieweg’s] voice and his singing... I quite like her [Beate Mordal's] voice, which is very clear and strong and well suited to this repertoire... The orchestral parts are given excellent interpretations by the Kölner Akademie, and especially the players of the trumpets and horns deserve praise.