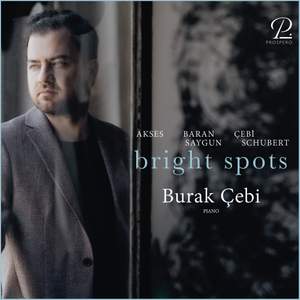 II. The colour of time

When Cebi compiled the repertoire for this recording, it was not so much his intention to introduce the audience to as many different composers from Turkey as possible. Rather, he was guided solely by his personal taste in the selection of pieces and chose the works he most wanted to record.

Burak Cebi, an outstanding pianist and composer of his generation, captivates audiences with his poetic, introspective approach to music making. His playing is marked by tonal perfection, subtly structured voicing and a range of moods and colours, allowing meditative moments to unfold, for example, in the late piano sonatas of Beethoven and in Chopin's nocturnes. Since his recent successes in competitions in Italy, Spain, and Turkey, the Germany-based artist has made guest appearances in Berlin, Munich, Hamburg, Leipzig and practically all of Turkey's major concert halls.

Cebi hails from a Turkish family of musicians with deep and extensive roots in the Western classical tradition. Although he received his first music lessons at the age of five, it was not until age 12 that he began to train as a pianist at the state conservatory in Izmir. He completed his musical studies at the Hochschule fr Musik in Nuremberg, earning a soloist diploma. He attended the master classes of Stephen Kovacevich, Jean-Franois Antonioli, Hseyin Sermet, Abdel Rahman El-Bacha, Filippo Gamba, Bernd Glemser and Jura Margulis. He was awarded first prize in the Orchestra Sion International Piano Competition in 2013 in Istanbul, second prize in Forum Orihuela 2016 in Spain and second prize at IMA Inharmonia 2016 in Rimini, Italy.