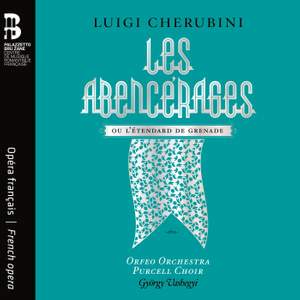 Cherubini’s Les Abencérages, premiered in 1813, heralds the spectacle and extravagance of Romantic grand opera. From the Alhambra gardens to the battlefield, the action skilfully intertwines political conspiracies with a love story. Underpinned by the energy and timbres of period instruments, this recording demonstrates the work’s modernity and its musical qualities. Anaïs Constans valiantly tackles the demanding role of Noraïme, while Edgaras Montvidas displays his lyric tenor voice in a series of sublime airs whose beauty was already hinted at by none other than Roberto Alagna in a recital disc released in 2003. Around this couple, a plethoric cast of soloists (Dolié, Sargsyan, Williams, Martin, Lavoie, etc.) achieves the same high standards of French diction and style. The Hungarian conductor György Vashegyi, flanked by the Purcell Choir and Orfeo Orchestra, reveals here another key milestone of French Romantic opera.