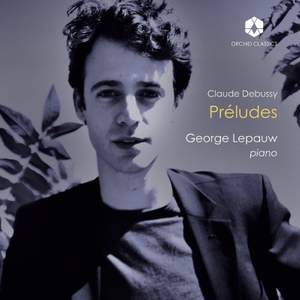 "Franco-American pianist George Lepauw returns to Orchid Classics with the complete Preludes for piano by Claude Debussy. Lepauw has released several highly successful albums with Orchid, including Bach’s Well-Tempered Clavier and Beethoven’s Diabelli Variations. The ambition of those releases is matched by this recording of both books of Debussy’s Preludes, which represent some of the most colourful, intricate and finely-nuanced piano music in the repertoire. As Lepauw explains in the album booklet: “Each one of these preludes is a world unto itself and can easily stand alone. Listening to them individually or as part of the entire set is equally rewarding.” George Lepauw was named Chicagoan of the Year in 2012 by the Chicago Tribune for his visionary artistic leadership in music, art and film festival programming, and has been recognised by the New York Times for his “singing tone” and by the Chicago Tribune as a “prodigious pianist”."