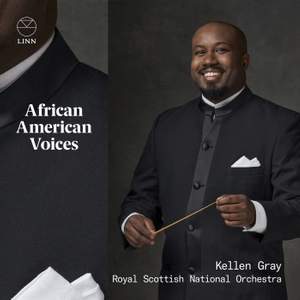 Under the baton of their assistant conductor, Kellen Gray, the Royal Scottish National Orchestra skilfully buckle down to their task. — BBC Music Magazine, Christmas 2022, 3 out of 5 stars More…

I. The Bond of Africa

II. Hope in the Night

III. O, Le’ Me Shine, Shine Like a Morning Star!

The Royal Scottish National Orchestra teams up with its Assistant Conductor Kellen Gray to record works by three of the twentieth century’s greatest African American voices. Released to coincide with Black History Month, the two symphonies by William Levi Dawson and William Grant Still proved to be fundamental in the utilization of Afro-American idioms within the symphonic form. Each composer focused on one of the two original staples of African American music: folk and jazz. William Levi Dawson’s Negro Folk Symphony takes its inspiration from West African folk idioms, American Negro spirituals and early African American folk rhythms and songs from Gullah culture. William Grant Still’s Symphony No. 1 draws its influence from elements popular in jazz and pre-jazz. Although the latter is the more well-known figure in American music, Dawson was every bit as significant in the timeline of African American music, and his only published symphony is astonishingly mature for a composer’s earliest efforts at symphonic writing. This programme also celebrates the centenary of George Walker’s birth with the inclusion of his Lyric for Strings.

Under the baton of their assistant conductor, Kellen Gray, the Royal Scottish National Orchestra skilfully buckle down to their task.

Working in Black musical theatre and collaborating with George Gershwin and Paul Whiteman, Still brings a blues-jazz sonority to his Symphony No 1 “Afro American” (1931), both exuberant and atmospheric...The RSNO honours this repertoire with playing of buoyancy and dexterity.