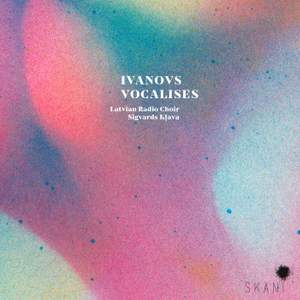 That said, there are some truly beautiful textures to be relished, immaculately sung by this estimable choir. — BBC Music Magazine, January 2023, 3 out of 5 stars

Ivanovs: On a Rainy Day

Ivanovs: In Commemoration of Heroes

The vocalises by Janis Ivanovs sung by the Grammy Award winning Latvian Radio Choir see the world-wide release for the very first time with this album.

Ivanovs, perhaps the greatest of Latvian symphonic composers, wrote the vocalises from the mid-1960s up until a year before his death, and they are dominated by the autumnal, elegiac mood characteristic of his later works. As soundscapes with imaginatively programmatic titles, the vocalises call to mind a series of compositions from Ivanovs' youth (symphonic paintings, solo songs, arrangements of folk songs) that were also dedicated to the nature of his homeland and its beauty, sanctity and mystery.

In a way, they form an arc connecting the end of his life back to its beginning. Compared to the earlier works, however, the vocalises have the more serene balance and enlightenment that comes from viewing life and the world from a greater distance.

That said, there are some truly beautiful textures to be relished, immaculately sung by this estimable choir.