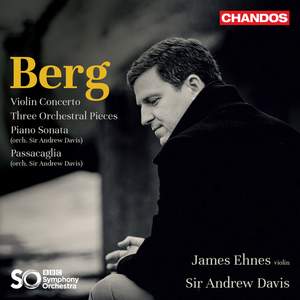 Ehnes gives a hauntingly elegiac account of Berg’s Violin Concerto...[He] makes it sound like a requiem not only for Manon Gropius, but also for Berg himself...His mellow tone is ideally captured... — BBC Music Magazine, December 2022, 5 out of 5 stars More…

Born in 1885, Alban Berg was one of the most significant composers of the Second Viennese School, whose output proved tremendously influential in the development of music in the twentieth century. He was a student of Schoenberg, who found that his juvenile compositions were almost exclusively written for voice; his natural ability to write lyrical melodic lines (even in later life while following the restrictions of twelve-tone serialism) probably remained the most outstanding quality of his style. His Op. 1 Piano Sonata was the fulfilment of a task set by Schoenberg to write non-vocal music. The Passacaglia, written between the sonata and World War I was only completed in short-score, and may have been intended to form part of a larger work. Both pieces are recorded here in skilful orchestrations by Sir Andrew Davis. The Three Orchestral Pieces were composed alongside his first great masterpiece, Wozzeck, and could be seen as a tribute to his musical hero, Mahler. The Violin Concerto, from 1935, was commissioned by the American violinist Louis Krasner, but was inspired by the premature death (from polio) of Manon Gropius, the daughter of Alma Mahler and the architect and Bauhaus founder Walter Gropius, hence the subtitle ‘to the memory of an angel’. It proved to be one of the composer’s final works as Berg died later that year as the result of an abscess from an insect sting.

Ehnes gives a hauntingly elegiac account of Berg’s Violin Concerto...[He] makes it sound like a requiem not only for Manon Gropius, but also for Berg himself...His mellow tone is ideally captured on the recording, as is his readiness to play the role of accompanist when the main melodic line lies in the orchestra.

In all, the BBC Symphony are on fine form. When it comes to the Violin Concerto, theirs is an unhurried reading, with James Ehnes sweet-toned and not afraid to linger in the opening bars, where violin and harp trade arpeggios from which Berg fashions his tone-row.

This is a remarkable disc... The performance of the two works of genius – the Three Pieces for orchestra and the Violin Concerto – are revelatory in their sympathy and understanding.

Enormously rewarding, this disc sets Andrew Davis’s insightful and revelatory orchestrations of the Piano Sonata and Passacaglia beside Berg’s Three Orchestral Pieces, Op 6...and the Violin Concerto, written as an elegy for Alma Mahler’s daughter, with James Ehnes favouring a high-romantic approach that works beautifully but won’t be to everyone’s taste.

The warm-toned soloist is James Ehnes, who at times might be just a little too affectionate for some tastes, especially in the final set of variations; overall, though, this is a wonderfully idiomatic and accomplished Berg collection, with some outstanding playing from the BBC Symphony Orchestra.

This is an expansive reading, always ready to stop and smell the flowers along the way, but never losing sight of its sure narrative line. The orchestral playing is exceptional, and the recorded sound beautifully clear.

The orchestra plays wonderfully, but much credit is also due to conductor Andrew Davis... All this is wonderful, but it’s the performance of Berg’s last completed work, the Violin Concerto, which is the real heart of the CD. The soloist James Ehnes gives a rapt tender glow to the solo part.