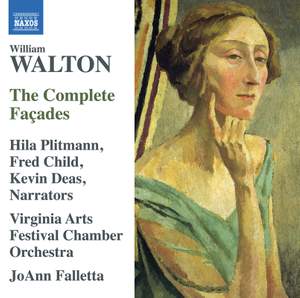 The playing of the instrumentalists under JoAnn Falletta is exceptionally clear both in manner and recorded sound, Timothy McAllister’s oily saxophone in particular conjuring up the jazz elements... — MusicWeb International, October 2022 More…

X. The Man from a Far Countree

XI. By the Lake

XIV. Four in the Morning

Walton: Façade 1, An Entertainment, XV. Something Lies Beyond the Scene

I. Flourish - Came the Great Popinjay

Edith Sitwell’s invitation to William Walton to collaborate on an innovative, revolutionary new work came at a critical moment in the young composer’s career, and Façade proved to be his first great success. The peerless combination of a peculiarly English dry wit, genuine pathos and superlative technical skill remains an extraordinary achievement. Sitwell’s verses conjure a satirical and poignant world of bourgeois late-Victorian England, while Walton’s settings unfailingly enhance and enrich the texts in a work in which words and music are unquestionably of equal importance. This release includes the first recording of Small Talk (1922) and three numbers first performed in 1977 but subsequently rejected by the composer. This recording includes not only the refined and polished Façade – An Entertainment as it was left by its creators, but also includes the verses and settings that were re-worked for Façade 2 – A Further Entertainment in the 1970s and other numbers originally conceived for the work and later substituted for other verses, making this recording as complete an edition of the whole piece as anyone could desire. The team of narrators for this recording is a particularly strong one. Hila Plitmann is a two-time GRAMMY Award-winning soprano and actress, while Kevin Deas has gained international renown as one of America’s leading bass-baritones. Fred Child is the host of APM’s Performance Today, the most-listened-to classical music radio show in the USA.

The playing of the instrumentalists under JoAnn Falletta is exceptionally clear both in manner and recorded sound, Timothy McAllister’s oily saxophone in particular conjuring up the jazz elements that underlay Walton’s original inspirations.