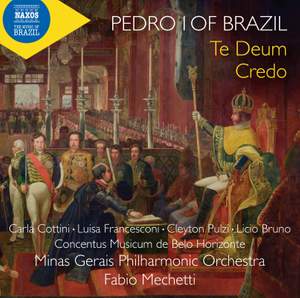 Pedro I of Brazil

Naxos is to be congratulated on assembling all-Brazilian forces for this fine new recording, which will surely appeal to those curious to experience this European-influenced music from South... — Choir & Organ, December 2022, 4 out of 5 stars More…

Pedro I: Credo do imperador

This year marks 200 years since the proclamation of Brazil’s independence, by Dom Pedro I in September 1822. Developed in collaboration with the Brazilian Ministry of Foreign Affairs, The ‘Music of Brazil’ series presents around 100 orchestral, chamber, choral and vocal works from the 19th and 20th centuries will be recorded by the country’s top orchestras, ensemble and artists. Dom Pedro I was the first Emperor of Brazil, proclaiming its independence from Portugal in 1822. A gifted musician, Pedro I is one of only a few monarchs to have become known as a composer. A performance of his Abertura (‘Overture’) was organised in Paris in 1832 with some in the audience convinced that it had been composed by Rossini, while the Hino da Independência do Brasil (‘Hymn to the Independence of Brazil’) remains one of the country’s best-loved anthems. Operatic in character, the Te Deum celebrated the baptism of Pedro’s first son, and the joyous Credo is one of his most frequently performed works.

Naxos is to be congratulated on assembling all-Brazilian forces for this fine new recording, which will surely appeal to those curious to experience this European-influenced music from South America.

The Te Deum (1820) is the star of the show, genuinely impressive and showing a real understanding not only of orchestral writing but of choral effect.