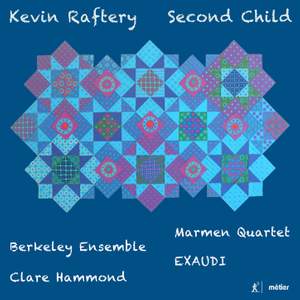 Kevin Raftery was born in St. Louis, Missouri, in 1951 and studied composition with Peter Racine Fricker at the University of California, Santa Barbara. In 1989 he moved to London where he studied with Justin Connolly and maintained a dual career as musician and project manager until 2004 when he retired from non-musical work. Now a citizen of the UK and of Ireland, he sings in the New London Chamber Choir and plays bassoon in several ensembles. Composing, however, has always been his primary concern. This ‘Second Child’ album follows his first portrait recording for Métier, which included his First String Quartet and other chamber works. Here his Second Quartet is partnered with choral works (both sacred and secular), and works for solo piano, violin duo and ensemble. Raftery’s music may be mildly dissonant at times and harmonically adventurous, but is always brilliantly constructed: new music which is a joy to hear. The performers here are of the top flight. Clare Hammond is in great demand for recordings and recitals, and recently for film roles too. She was described by Gramophone as a ‘pianist of extraordinary gits’. EXAUDI is one the world’s leading vocal ensembles in the field of new music and while here they produce delightful renditions of relatively tonal works they also have a special affinity with the ‘radical edge’ of new music. The Marmen String Quartet, founded in 2013 at the Royal College of Music in London, is fast gaining a reputation for the vitality and vigour of their performances. They won major international competitions in 2019. The Berkeley Ensemble also specialises in the new – and also the neglected and forgotten. Its eight recordings (before this one) include 18 world premieres and have elicited great praise including a Gramophone award nomination.