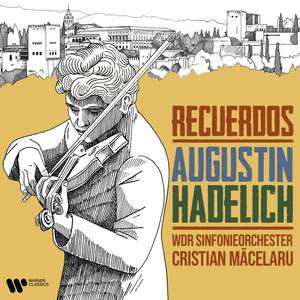 In his booklet note, violinist Augustin Hadelich highlights the Britten...Yet, perhaps precisely by not identifying so closely to the Prokofiev, Hadelich actually shows greater respect for that... — BBC Music Magazine, November 2022, 4 out of 5 stars (Performance) / 5 out of 5 stars (Recording) More…

A subtle and profound Spanish theme runs through Recuerdos – ‘Memories’. Violinist Augustin Hadelich has conceived an album that unites three works for violin and orchestra and a piece originally written for solo guitar. For Britten’s Violin Concerto, Prokofiev’s Violin Concerto No 2 and Sarasate’s Carmen Fantasy he is joined by the WDR Sinfonieorchester and its Chief Conductor, Cristian Măcelaru; he remains alone for Ruggero Ricci’s arrangement of Tárrega’s shimmering Recuerdos de la Alhambra. “For years, I’ve been thinking about how to tell the story of the Britten violin concerto,” says Hadelich. Written in 1938, the work expresses the pacifist composer’s anguish at the Spanish Civil War, which broke out just months after Prokofiev’s Violin Concerto No 2 was premiered in Madrid.

In his booklet note, violinist Augustin Hadelich highlights the Britten...Yet, perhaps precisely by not identifying so closely to the Prokofiev, Hadelich actually shows greater respect for that score. And because he makes much of the sweetness and sunlight of the first movement’s second theme, there’s a stronger than usual sense by the movement’s end that storm clouds have stealthily darkened the landscape.