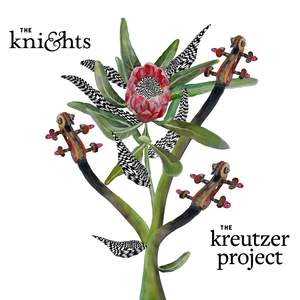 Colin Jacobsen’s orchestration of Beethoven’s ‘Kreutzer’ Sonata is mostly convincing...had you never heard the original, you might accept this as a viable slice of Beethoven...Shorthand is an... — BBC Music Magazine, November 2022, 4 out of 5 stars (Performance) / 5 out of 5 stars More…

I. Adagio sostenuto - Presto (arr. for violin and orchestra by Colin Jacobsen)

The Knights, the bold Brooklyn-based orchestral collective, explore the worlds of Beethoven, Tolstoy and Janacek with orchestrations of the composers' respective "Kreutzer Sonatas", and new works including a commission from Anna Clyne inspired by the Russian writer.

Beethoven and Tolstoy in turn inspired Czech composer Leos Janacek, whose first string quartet is also called "Kreutzer Sonata". The Knights' response to these iconoclastic touchstones is to reimagine the Beethoven as "Kreutzer Concerto", arranged by The Knights' co-founder Colin Jacobsen who is also the orchestrated version's violin soloist; and the Janacek as orchestrated by The Knights' co-founder and conductor Eric Jacobsen. They keep the canon going with Colin's newly composed "Kreutzings", which makes buried allusions to both Beethoven and Janacek and a commission from Anna Clyne, whose piece "Shorthand" takes its title from a line in Tolstoy's novella: "music is the shorthand of emotion".

The Knights are a collective of adventurous musicians dedicated to transforming the orchestral experience and eliminating barriers between audiences and music. Driven by an open-minded spirit of camaraderie and exploration, they inspire listeners with vibrant programs that encompass their roots in the classical tradition and passion for artistic discovery. The orchestra has toured and recorded with renowned soloists including Yo-Yo Ma, Dawn Upshaw, Bla Fleck, and Gil Shaham, and has appeared across the world's most prestigious stages, including those at Carnegie Hall, Tanglewood, Ravinia, The Kennedy Center, and the Vienna Musikverein. The Knights seek to share music with a broad general public regardless of background, and the group designs programs to appeal to both loyal followers and new listeners alike. The Knights are proud to be known as 'one of Brooklyn's sterling cultural products... known far beyond the borough for their relaxed virtuosity and expansive repertory' (The New Yorker). Their roster boasts musicians of remarkably diverse talents, including composers, arrangers, singer-songwriters, and improvisers, who bring a range of cultural influences to the group, from jazz and klezmer to pop and indie rock music.

Hailed by the New York Times as 'an interpretive dynamo', conductor and cellist Eric Jacobsen has built a reputation for engaging audiences with innovative and collaborative programming. He is the newly-named Music Director of the Virginia Symphony, becoming the 12th music director in the orchestra's 100-year history. Jacobsen is Artistic Director and conductor of The Knights, and serves as the Music Director for the Orlando Philharmonic Orchestra. Jacobsen founded the adventurous orchestra The Knights with his brother, violinist Colin Jacobsen, to foster the intimacy and camaraderie of chamber music on the orchestral stage.

Violinist and composer Colin Jacobsen is 'one of the most interesting figures on the classical music scene' (Washington Post ). An eclectic composer who draws on a range of influences, he was named one of the top 100 composers under 40 by NPR listeners. He is also active as an Avery Fisher Career Grant-winning soloist and a touring member of Yo-Yo Ma's famed Silk Road Ensemble. For his work as a founding member of two game-changing, audience-expanding ensembles the string quartet Brooklyn Rider and orchestra The Knights Jacobsen was selected from among the nation's top visual, performing, media, and literary artists to receive a prestigious and substantial United States Artists Fellowship.

Colin Jacobsen’s orchestration of Beethoven’s ‘Kreutzer’ Sonata is mostly convincing...had you never heard the original, you might accept this as a viable slice of Beethoven...Shorthand is an elegiac piece for much of its length, and packs a real emotional punch, with cellist Karen Ouzounian’s passionate playing leading the way.