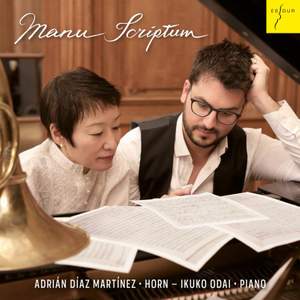 Gounod: Mélodies (6) for Horn and Piano

With their new CD MANU SCRIPTUM (from Latin: written by hand), Spanish hornist Adrian Diaz Martinez, Professor for horn at the University of Music Lubeck since 2021 and his Japanese piano partner Ikuko Odai once again present an exciting concept album.

This album is inspired by composers' manuscripts and their first sketches and ideas for their works. Daz Martnez writes: "Interpreting such first musical ideas is a particularly exciting task, because in this way one can trace the original idea of these sounds".

Adrian Diaz Martinez was particularly inspired by a quote by Robert Schumann - on the CD with the original version of his Adagio and Allegro op. 70 for Horn and Piano: "The first concept is always the most natural and the best. The mind misleads, the feeling does not." In order to get as close as possible to this first stage of music creation, Ikuko Odai and I embarked on a long and intense search for information about manuscripts, old letters, books and materials that were often kept in hidden drawers. It has been a fantastic journey. Moreover, it proved to be a wonderful opportunity to discover how the selected composers Charles Gounod, Robert Schumann, Richard Strauss and Volker David Kirchner thought, what they dreamed of, loved and lived. Charles Gounod's Six Melodies for Horn and Piano are of particular importance to the history of the horn since they were written for the cor pistons, a more advanced version of the natural horn. This instrument had two valves which made it possible to play chromatic steps on the horn for the first time. In the Six Melodies, whose sheet music was discovered along with many other melodies for voice and piano in a Paris bookstore, Gounod sought simple melodies which the horn would be able to play always at a pitch typical of the male voice.

The first sketch for the Adagio (Romance) and Allegro op. 70 for Horn and Piano by Robert Schumann recorded on the CD bears a great challenge for the performers: "The greatest obstacle in dealing with Schumann' manuscripts was his complex personality, full of seriousness, skepticism and lack of conformity. We found it extremely difficult and sometimes almost impossible to discern what his original idea for some passages was. Even harmonies were difficult to discern, as he crossed them out and revised them over and over again. Staying loyal to his credo ( The first concept is always the most natural and the best. The mind misleads, the feeling does not.) was thus anything but an easy task".

Richard Strauss had a great affinity and love for the horn from his childhood, his father Franz Strauss was a horn player himself after all. The first manuscript of the 2nd Horn Concert is dated the 11th of November, 1942. The manuscript is privately owned and has remained largely unknown to this day. This CD presents the interpretation of the reviewed copies of the manuscript in a version for horn and two pianos, making it possible to hear all the notes that the composer wrote down.

Composer Volker David Kirchner created his work Tre Poemi for Horn and Piano in 1986 and 1987. In the three movements - Lamento d'Orfeo, Danza d'Orfeo and La Gondola Funebre - Kirchner here employs techniques with new effects, sounds and coloring that have never been performed before in the repertoire for horn and piano, and hence have never been heard before. Through the Tre Poemi, the ensemble of two instruments becomes one, as it were, as one is completely dependent on the other to create this new three-dimensional sound world.