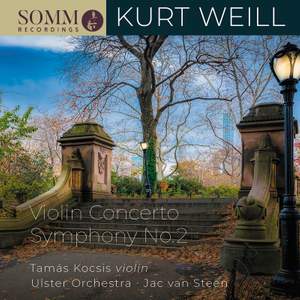 At 24, Weill’s iconic Berlin-cabaret sound is already identifiable: the dance-like flute solo in the ‘Serenata’; and the rollicking finale. Soloist Tamás Kocsis, leader of the Ulster Orchestra,... — BBC Music Magazine, October 2022, 5 out of 5 stars (Performance) /. 4 out of 5 stars (Recording) More…

Symphony by Tomás Kocsis and the Ulster Orchestra conducted by Jac van Steen. Although Weill found fame in theatre-focused collaborations with Bertolt Brecht that produced the era-defining The Threepenny Opera, the onetime pupil of Ferruccio Busoni straddled the worlds of music-theatre, jazz and the concert hall with music of daring aplomb and dazzling achievement. Dedicated to Joseph Szigeti, his five-movement Violin Concerto of 1924 also pays tribute to the ailing Busoni and sports discernible allusions to Stravinsky, Mahler and the potent popular music of Weimar Berlin’s cabaret clubs. A unique blend, as Robert Matthew-Walker comments in his authoritative booklet notes: “No comparable work had appeared before from any composer”. Composed a decade later, the Second Symphony was premiered by Bruno Walter and the Concertgebouw Orchestra in Amsterdam. In three movements, “Weill’s contrapuntal mastery and his equally unselfconscious command of instrumentation present us with genuinely symphonic music, such as a 20th-century Haydn would have appreciated and enjoyed”. Jac van Steen’s previous SOMM releases include acclaimed recordings of Mozart piano concertos with Peter Donohoe, Valerie Tryon and Mishka Rushdie Momen (SOMMCD 278-2), The Deeper the Blue, an intriguing exploration of colour and timbre in music featuring Vaughan Williams, Ravel, Dutilleux and Kenneth Hesketh (SOMMCD 275), and the International Classical Music Awards-nominated pairing of concertos by Albeniz and Mignone with Clélia Iruzun (SOMMCD 265). The Ulster Orchestra has released world premiere recordings of Vaughan Williams’ Fantasia for Piano and Orchestra and two piano concertos by William Matthias with pianist Mark Bebbington (SOMMCD 246)

At 24, Weill’s iconic Berlin-cabaret sound is already identifiable: the dance-like flute solo in the ‘Serenata’; and the rollicking finale. Soloist Tamás Kocsis, leader of the Ulster Orchestra, is superb throughout this pristine recording.