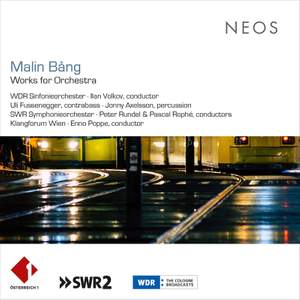 Swedish composer Malin Bang always pushes boundaries when it comes to common notions of the sound of classical instruments. She sees the orchestra as a huge space that she explores from within. The relationship between the collective and the individual plays an important role, exemplified in the politically motivated "splinters of ebullient rebellion" (the work was awarded the Orchestra Prize at the Donauschinger Musiktage 2018).

The recordings on the CD are live and are also world premieres.

Urban life and sounds are an important inspiration for Bang's music. In "ripost", for example, she lets the two soloists (Uli Fussenegger, double bass and Jonny Axelsson, percussion) explore a noisy, pulsating metropolitan tunnel, the Stuttgart "Wagenburgtunnel", which is in turn represented by the orchestra, while in "avgar, pagar" she processes sounds from her hometown Gothenburg.

"irimi" for large ensemble deals in a special way with the physical aspect of sound production; this concerns both the movements of the musicians and, in the most original sense, the material from which the instruments are made.

After the chamber music CD "structures of light and spruce" (NEOS 11817), this CD with orchestral works offers another deep insight into the musical cosmos of Malin Bang.