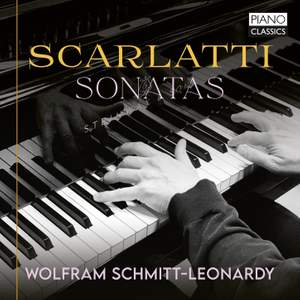 One the most intelligently programmed and distinctively played Scarlatti collections to cross my reviewer’s desk in years. — Gramophone Magazine, September 2022

‘An eagle whose wings are grown,’ according to his father Alessandro, the young Scarlatti left his native Naples for Venice, ‘escorted only by his own ability.’ By his early 20s he had already held audiences in thrall with an ability at the harpsichord which was deemed almost supernatural. There is assuredly the most prodigal imagination at work, as well as an extraordinarily sophisticated keyboard technique, in the 555 surviving keyboard sonatas which fuse Italianate cantabile and counterpoint with vivid Hispanic imagery: folksong, castanets, military trumpets and strumming guitars.

All these qualities can be enjoyed in Wolfram Schmitt-Leonardy’s selection of 17 sonatas. Several of them are taken from the collection of Kk1-30 (in the catalogue produced by Ralph Kirkpatrick) which comes down to us as the earliest source of the sonatas in print, published shortly before he moved to Lisbon, thence to Madrid and around the royal courts of Spain, in the service of the princess who would become the Queen of Spain. Her patronage afforded Scarlatti the time and resources to evolve a highly personal style, full of eccentricity and flights of fancy.

Hardly less than Bach, these sonatas have become for many pianists a proving ground for their own technique and imagination, rewarding an improvisatory response to their flamboyant effects. However, Schmitt-Leonardy also features several of the composer’s most poetic and reflective sonatas such as the ‘Aria’ Kk29 and the melancholy soliloquy of Kk208.

Wolfram Schmitt-Leonardy was born in Saarlouis, Germany, in 1967, and his first important teacher was a student of Walter Gieseking and Edwin Fischer. His quintessentially pianistic approach to Scarlatti exploits all the colouristic possibilities of a modern grand, while articulating the quick sonatas with sparkling deftness of touch.

‘Crisp, vibrant, easy-to-enjoy Brahms-playing… this young artist is a superb representative of a great tradition that should never fade from style.’ – Fanfare (Brahms, 92550)

‘The two words that first come to mind listening to Wolfram Schmitt-Leonardy play the Ballade in G are “exemplary” and “impeccable”.’ – Fanfare (Chopin, 95210)

‘Schmitt-Leonardy possesses all the components of a major Chopin pianist… The best single-disc version [of the Sonatas] I have ever heard.’ – Fanfare (Chopin, 95209)

‘For a substantial and cheap introduction, this one is hard to beat.’ – Fanfare (Schumann, 93772)

One the most intelligently programmed and distinctively played Scarlatti collections to cross my reviewer’s desk in years.