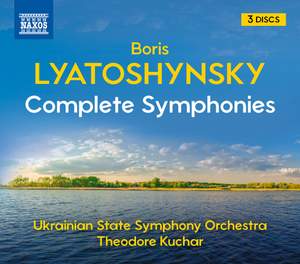 Boris Lyatoshynsky was a leading member of the Ukrainian cultural renaissance in the 20th century and his five symphonies remain the most important cycle in his countrys musical history. Although the Romantic and lyrical First Symphony evokes the traditions of Borodin, Glire and Tchaikovsky, Lyatoshynsky soon moved away from Russian models, drawing together Ukrainian folk songs and melodies with contemporary harmonic and formal approaches. His symphonic orchestration was inventive, his themes memorable. The Third Symphony is his most moving and famous, and originally bore the epigraph Peace will defeat war. Also included is his emotionally charged symphonic ballad Grazhyna.