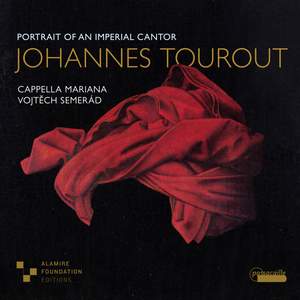 Tonrroutt, Thauranth, Tauront, Taurath, Torenth; few composers have had their names mangled by scribes so badly as the protagonist of this recording. The identity of the composer behind these variants has long remained shrouded in mystery.

It is known that a certain Johannes Tourout was cantor in the chapel of Emperor Frederick III of Habsburg. The composer must have been very popular in Central Europe: a large number of his works can be found in important manuscripts from that region.

Given the stupendous craftsmanship evident in his compositions, it is surprising that modern musicians have not paid greater attention to them.

Cappella Mariana is a vocal ensemble specializing in medieval and Renaissance polyphony and the vocal repertoire of Early Baroque.

Cappella Mariana was founded in 2008 as one of the few local ensembles focussing on the interpretation of high vocal polyphony, especially from Italian, Flemish, and English Renaissance.

Vojt 283;ch Semerd is a graduate of the Prague Conservatory, Charles Uiversity in Prague (Choir Conducting) and Conservatoire national suprieur de musique et de danse in Paris. As a soloist and chamber musician he has appeared at prestigious venues and festivals around Europe.