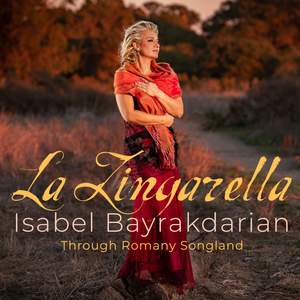 I. He, Zigeuner, greife in die Saiten ein! (arr. for voice, 2 violins, viola, cello and piano by Peter Tiefenbach)

Through Romany Songland, soprano Isabel Bayrakdarian takes the listener on a journey through lieder by Brahms, Bizet and Dvorak, operetta by Lehar, Kalman and Herbert, and spicy Spanish songs.

Soprano Isabel Bayrakdarian has travelled far and wide, as an international opera star and an Armenian who was born in Lebanon, immigrated to Canada, and is now settled in southern California. Her life is a journey that informs her new recording, La Zingarella: Through Romany Songland. "The music transcends geography," she says. "It taps into human nature and unites us all. It's about freedom of the spirit, about living life without knowing what tomorrow holds. It's about enjoying every single minute." Isabel embarked on an album of art songs that draw on gypsy melodies Brahms' Zigeunerlieder, Dvorak's Ciganske Melodie, Bizet's Habanera but her journey led to a wealth of recherch gems. The title track by French composer Maurice Yvain commingles with fellow-operetta composers Franz Lehr ('Lied und Csardas' from Zigeunerliebe), Emmerich Kalman ('Heia, heia, in den Bergen' from The Csardas Princess) and Victor Herbert (Gypsy Love Song from The Fortune Teller). Two South American Gypsy Songs by American folk song collector Henry F.B. Gilbert set words by ethnomusicologist Laura Alexandrine Smith, whose authoritative book lends the album its subtitle. Isabel commissioned new arrangements for the songs on this album, with violin, viola, cello, and piano lending a laser beam lucidity to the music.

As a highly sought-after soprano at opera houses and concert halls across the world, the Lebanese-born Canadian-Armenian-American soprano has become as celebrated for her beauty, presence, and style as for her strikingly multidimensional voice. Isabel has toured the globe to appear with the premier orchestras and most prestigious opera companies, performing under the batons of renowned conductors like Seiji Ozawa, James Conlon, David Zinman, Michael Tilson Thomas, and Alan Gilbert to name a few. She was also the featured vocalist on the Grammy Award-winning soundtrack from the blockbuster film The Lord of the Rings: The Two Towers, and on the soundtrack of Atom Egoyan's Ararat. She sang on the BBC-produced short film Holocaust: A Music Memorial Film from Auschwitz, as well as her own Gemini-nominated film Long Journey Home, documenting her first visit to her ancestral homeland, Armenia.

"wistful and reflective ... The performances by soprano Isabel Bayrakdarian and her fellow musicians are wonderfully haunting" BBC Music Magazine on Armenian Songs for Children AV2449

"Born to perform" The Armenian Mirror-Spectator