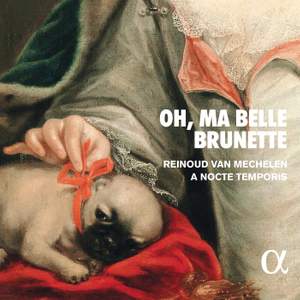 The term ‘brunette’ refers not only to a young woman with brown hair, but also to a musical form that was highly fashionable from the late seventeenth century to the early eighteenth. The genre evolved from the air de cour, extremely popular in France since the beginning of the seventeenth century. The compositional process, however, remained very similar: to write a short, tender song, dealing with themes of love or nature, which could be sung alone or accompanied by a harmonic instrument. The late seventeenth century also saw the appearance of an instrument that soon became a favourite of composers and amateur musicians: the German flute, now called the traverso or Baroque flute. In this new programme, tenor Reinoud van Mechelen, flautist Anna Besson and A nocte temporis present an anthology of airs and brunettes ranging from the most touching song to the heartiest drinking song (air à boire).