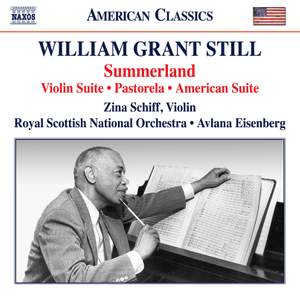 No. 2, Summerland (Version for Violin & Orchestra)

William Grant Still, the “Dean of Afro-American Composers,” was part of the Harlem Renaissance and wrote nearly 200 works including nine operas and five symphonies. Still’s many awards included three Guggenheim Fellowships and eight honorary doctorates. His work combines Classical forms with jazz and blues idioms and was inspired by the rich tradition of African American spirituals. Still hoped that his music would serve a larger purpose of interracial understanding, and this joyous, moving and hauntingly beautiful program – featuring all world premiere recordings – is infused with Still’s love of God, country, heritage, and even his mischievous dog Shep. Booket notes are written by Zina Schiff alongside conductor, Avlana Eisenberg.

a beguiling portrait of his stylistic journey between 1918 and 1965...From the short, romping Quit Dat Fool’nish (1935) and balladinspired Can’t You Line‘Em (1940) to the sumptuous orchestral Serenade (1957), each work has a yearning optimism that’s wrung to effect.

this is a worthwhile addition to Still’s discography.