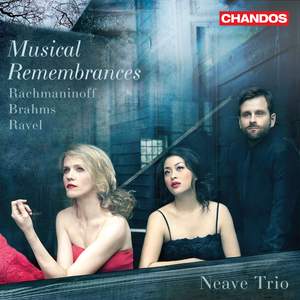 Hailed by the magazine BBC Music for its ‘generous and warm-hearted, utterly beguiling playing’, the Neave Trio has emerged as one of the finest young ensembles of its generation. It has been praised by WQXR Radio in New York City for its ‘bright and radiant music making’, described by The Strad as having ‘elegant phrasing and deft control of textures’, and praised by The New York Times for its ‘excellent performances’. Here, the trio presents a programme of music connected by the theme of Remembrance. Rachmaninoff’s early first piano trio was inspired by Tchaikovsky’s trio in A minor, and shows illuminating glimpses of the mature composer to come. The elegiac mood of Rachmaninoff’s work is matched by that of Brahms’s first trio – again an early composition – which was inspired by the composer’s (unrequited) feelings for Clara Schumann. Ravel’s only piano trio was composed in 1914, as France was being drawn into the horrors of the first world war. Ravel draws extensively on the rhythms and forms of his native Basque musical traditions, while the title of the second movement, ‘Pantoum’, refers to a form of traditional Malaysian poetry which typically deals with two separate themes in alternation, a feature to which Ravel responds with a series of contrasting themes and textures.