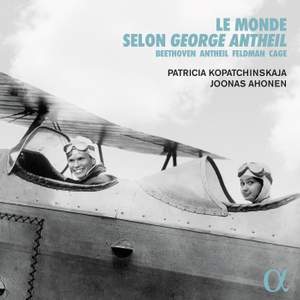 Fuelled by a trip to Tunis, the two inner movements are imbued with ‘all the strangeness of Africa’ according to Antheil, and Kopatchinskaja is in thrall to their mercurial fantasy. She’s also... — BBC Music Magazine, July 2022, 4 out of 5 stars (Performance) / 5 out of 5 stars (Recording) More…

Antheil: Sonata No. 1 for Violin and Piano

George Antheil called himself a ‘Pianist-Futurist’. A lover of speed, cars and aeroplanes, the American composer settled in the Paris of the Années Folles, where he frequented Picasso and Stravinsky, and composed works such as Sonate sauvage and Jazz Sonata, which caused a scandal: during a concert in Budapest, he even brandished a Chicago gangster-style pistol to restore silence in the hall ... He hero-worshipped Beethoven, whose pieces he played in the first part of his recitals before moving onto his own music. In 1933, he returned to the United States where he met John Cage and Morton Feldman. Patkop and the young Finnish pianist Joonas Ahonen – whom The Times, following what the journalist described as ‘one of those concerts you remember for ever’, presented as the violinist’s ‘doppelgänger’! – pay tribute to the ‘Bad Boy of Music’.

Fuelled by a trip to Tunis, the two inner movements are imbued with ‘all the strangeness of Africa’ according to Antheil, and Kopatchinskaja is in thrall to their mercurial fantasy. She’s also ravishingly lambent in the dreamy moonbathing of Cage’s Nocturne whose sensual torpor is disturbed by some strategic spikiness. And the Feldman is navigated with surefooted expressivity and dramatic precision.

Kopatchinskaja’s playing throughout has that same luminous, impish quality that makes virtually all her recordings approximate starbursts viewed from nearby: extreme dynamics and a kaleidoscopic array of colours keep you hooked.

her impetuous, sometimes rough-hewn assault on Beethoven’s Violin Sonata No 7 with pianist Joonas Ahonen certainly demands our attention. So does their unflagging delivery of the machine-age repetitions and Stravinsky-isms of George Antheil’s Sonata No. 1.