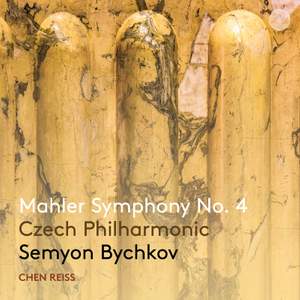 every tempo choice seems perfect. Bychkov doesn’t make an adagio-esque meal of the radiant song that frames the innocence-versus-experience third movement...Dynamics from the quietest imaginable... — BBC Music Magazine, July 2022, 5 out of 5 stars More…

In advance of the first instalment of his Mahler cycle with the Czech Philharmonic Orchestra on Pentatone, the conductor reflects on 'a lifetime of exploring and loving this music' - and why he believes that 'all Czech people are born musicians'...

The Czech Philharmonic and its Chief Conductor and Music Director Semyon Bychkov present a new recording of Mahler’s Fourth Symphony, laying the foundation of a complete Mahler symphonies cycle to appear on PENTATONE. It will be the label’s first ever full Mahler cycle, and the Czech Philharmonic’s first survey of this extraordinary symphonic opus since their recording under Vacláv Neumann between 1976 and 1982. Although chiefly active in Vienna during the heydays of his career, Mahler was born in what is now the Czech republic, and through this recording project, he returns to his native soil. For conductor Semyon Bychkov, Mahler’s symphonies are all about expressing the polyphony of life, and recording these works is the fulfilment of a life-long fascination. This cycle deliberately starts with the most popular and frequently-played Fourth, famous for its macabre scherzo, soothing slow movement and heavenly finale, sung by soprano Chen Reiss. The Czech Philharmonic is one of the world’s most acclaimed orchestras, with a rich tradition of performing Czech masters and music from Central Europe. Semyon Bychkov has led the greatest orchestras of the world, and is Chief Conductor and Music Director of the Czech Philharmonic as of the 2018/2019 season. Soprano Chen Reiss frequently appears on the biggest opera and concert stages throughout the world. Chen Reiss, Semyon Bychkov and the Czech Philharmonic all make their PENTATONE debut.

every tempo choice seems perfect. Bychkov doesn’t make an adagio-esque meal of the radiant song that frames the innocence-versus-experience third movement...Dynamics from the quietest imaginable to the very loudest are perfectly handled by the Rudolfinum recording.

Bychkov plainly knows what he wants and how to get it…The playing as such is wonderful. The Scherzo is closely observed rather than directly experienced, the Trio festooned with more string slides and abundant woodwind detail.