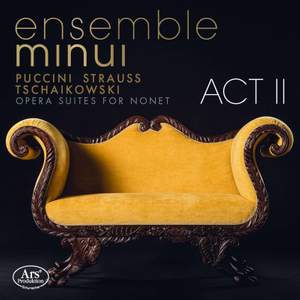 Located between chamber music and orchestra, the Carinthian-based ensemble minui has dedicated itself to the musical possibilities for large chamber music ensembles with elegance and finesse since its founding in 2016. While simple reductions of large orchestral works were initially on the program, opera music gradually became the great passion of ensemble minui.

In the arrangements of clarinettist Stefan Potzmann, the nine versatile orchestral musicians offer listeners with their second CD recording stylish new perspectives on three large-scale opera works, reduced to what is essential for them: the music!