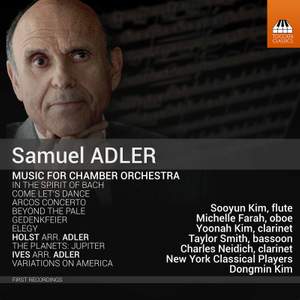 I. Slowly and Very Lyrically

Adler, S: Beyond the Pale

Adler, S: In the Spirit of Bach

The music of Samuel Adler – born in Mannheim in 1928 but long since one of the leading figures of American music – has its roots in the Neo-Classical clarity of composers like Copland and Hindemith, who were among his teachers. The works on this album arose from a range of impulses: a Neo-Baroque concerto grosso and a tribute to Bach encase a series of tributes to lost individuals and traditions; and two jeux d’esprit – Ives’ tongue-in-cheek Variations on America and Holst’s ‘Jupiter’ from The Planets – both bring jollity in Adler’s idiomatic arrangements for string orchestra.