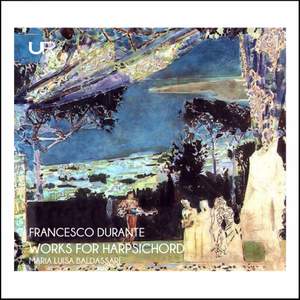 Durante, F: Toccata in A minor

Musician and teacher, Francesco Durante was so known at his time, that his name was given to a compositional school (that of the "durantisti"). He composed mostly vocal music, especially sacred, of which his keyboard works make up a limited part, where virtuosity is extremely common; elements like the very rapid scales, the arpeggios or the crossing of the hands are also widely found in other contemporaries from Naples, but his writing preserves characteristic features which are absolutely personal.

Under the generic title of toccatas, pieces in improvisational style can be found, as well as sonatas and fugues in the Italian style. The Studii e Divertimenti are dedicated to, and probably printed at the expense of, Giacomo Francesco Milano, prince of Ardore, a nobleman and highly talented musician who was a pupil of Durante. The prince was well known abroad too, particularly in France, where he lived for several years as ambassador of the Kingdom of the Two Sicilies. The Studii e Divertimenti have a regular structure, which is not commonly found in the Italian keyboard collections of the time: each tude, with its rather rigorous contrapuntal structure and substantial duration, is accompanied by a short divertimento in the same tone.