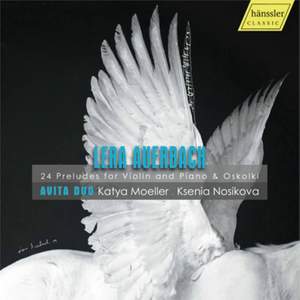 The Avita Duo really dig into Auerbach’s music, drawing out the myriad moods of these two cycles. Written in 1999, the colourful 24 Preludes and Fugues have a post-Prokofiev, post-Shostakovich... — BBC Music Magazine, June 2022, 5 out of 5 stars More…

Auerbach: 24 Preludes for Violin and Piano

A renaissance artist for modern times, Lera Auerbach is a widely recognized conductor, pianist, and composer. She is also a published poet and an exhibited visual artist. All of her work is interconnected as part of a cohesive and comprehensive artistic worldview. Born in the Russian city of Chelyabinsk in the Ural Mountains at the gateway of Siberia, Lera Auerbach has become one of today's most sought after and exciting creative voices. Her performances and music are featured in the world's leading stages - from Vienna's Musikverein and London's Royal Albert Hall to New York's Carnegie Hall and Washington D. C.'s Kennedy Center. Auerbach's exquisitely crafted, emotional, and boldly imaginative music reaches to global audiences. Orchestral collaborations include the New York Philharmonic, Philadelphia Orchestra, National Symphony, Oslo Philharmonic, Munich's Bayerisches Staatsorchester, Staatskapelle Dresden, and Vienna's ORF Radio Symphonieorchester, among many others. Auerbach's works for orchestra are performed by the world's leading conductors, including Christoph Eschenbach, Alan Gilbert, Vladimir Fedoseyev, Neeme Jarvi, Vladimir Jurowski, Charles Dutoit, Andris Nelsons, Osmo Vanska, Hannu Lintu, and Marin Alsop, to mention only a few.

The Avita Duo really dig into Auerbach’s music, drawing out the myriad moods of these two cycles. Written in 1999, the colourful 24 Preludes and Fugues have a post-Prokofiev, post-Shostakovich flavour. The Fragments of 2001 are spiky, brooding, and furious.