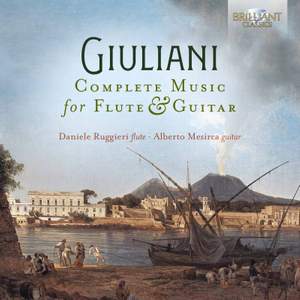 Giuliani, Mauro: Variations on the Air 'La biondina in gondoletta'

The combination of flute and guitar was a popular and appealing one for many amateur musicians of the early 19th century, and the Italian guitarist-composer Mauro Giuliani (1781-1829) realised its full potential with a string of commercial hits based on popular melodies of the time, well-known marches and arias, as well as more substantial concert works.

This is the first time that all of Giuliani’s flute-and-guitar music has been brought together and recorded in a single volume, and it makes for immensely attractive listening. His style is unfailingly pure, classically restrained and beautifully poised in its apparent lightness. Even the most overtly virtuosic moments are free of the pathos associated with masterworks of The Romantic age: this is music conceived to delight and to entertain first and foremost.

Following his birth and training as a musician in Italy, Giuliani enjoyed a profitable stay in Vienna from 1806 to 1819, winning the acquaintance and admiration of Beethoven. He struck up a friendship with a German flautist Johann Sedlatzeck (also admired by Beethoven) and together they gave many concerts together, in Vienna and on tour through Italy. The pieces featured on this collection were written for them to perform together and they accordingly make skilful use of the virtuosity and lyric gifts of both players.

CD 1 presents the most substantial and technically challenging works in the collection, including three variation sets and two Gran duetti concertante: multi-movement sonatas with imposing introductions. The two Serenades on CD 2 are conceived on an even grander scale but with a more light-hearted spirit, and CD 3 features a series of captivating pot-pourris, beginning with an unlikely but charming transformation of the Commendatore’s summons at the climax of Mozart’s Don Giovanni.

The partnership of flautist Daniele Ruggieri and guitarist Alberto Mesirca is an established one, with an adventurous album of American 20th-century music for this combination to their credit (95753).