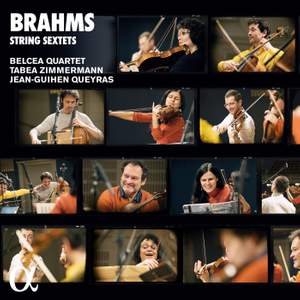 The two works have attracted numerous fine recordings, but here a luxury cast of the Belcea Quartet, Tabea Zimmermann and Jean-Guihen Queyras bring us a really special one – full-toned, warm-hearted... — BBC Music Magazine, May 2022, 5 out of 5 stars More…

Brahms was one of the first composers to write for pairs of violins, violas and cellos, blazing the trail for Dvořák, Tchaikovsky, Korngold and Schoenberg. His two sextets are early works, composed in 1860 and 1865 respectively. Brahms wrote to his publisher that the second was in ‘the same joyful vein’ as the first. Yet the composer’s life was sombre at this time: his mother died suddenly and his romantic relationship with the soprano Agathe von Siebold ended in failure; indeed, the first movement of the sextet opens with a viola motif on the notes A-G-A-D- B-E (AGADHE in German notation) . . . The members of the Belcea Quartet called in their friends Tabea Zimmermann and Jean-Guihen Queyras to record these peaks of the chamber repertory following a concert tour to some of Europe’s major venues.

The two works have attracted numerous fine recordings, but here a luxury cast of the Belcea Quartet, Tabea Zimmermann and Jean-Guihen Queyras bring us a really special one – full-toned, warm-hearted and sensitive to the luscious and the sinuous alike.

while I can think of numerous recordings of these works that offer affection and graciousness in abundance, I can’t think of another that’s as ear-opening as it is warm-hearted.

Brahms struggled to create the sound he wanted, telling Clara Schumann that No 1 was rubbish, to be thrown away. Had he heard these terrific players, he might have thought differently.