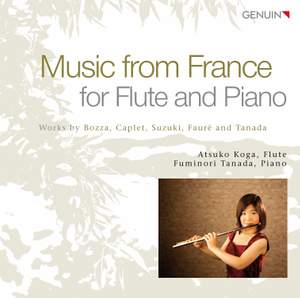 Music From France For Flute and Piano

What could be more French than the silvery sound, dreamy arpeggios, and airy elegance of the flute? All the works on Atsuko Koga's new GENUIN CD were composed in France and represent more than a century of flute history. All are also directly or indirectly connected to the tradition-rich Paris Conservatoire, where Eugène Bozza, André Caplet, and Gabriel Fauré studied and taught, as well as our two contemporaries, Fuminori Tanada and Rika Suzuki from Japan. The highly virtuosic pieces of these latter two composers – recorded here in world premiere recordings – were written for Atsuko Koga. They are as much a testament to her skill as the other Impressionist and early modern works.