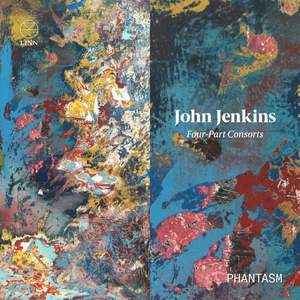 Phantasm brings its distinctively light, luminous and spectral sound to these busy tapestries, and the consort’s translucent textures are enriched in sundry pieces by the velvet warmth of a chamber... — BBC Music Magazine, April 2022, 5 out of 5 stars More…

Interview,  Laurence Dreyfus on the consort music of John Jenkins

The director of acclaimed consort Phantasm talks about their new album of intricate, yet intimate, Renaissance works for viols.

In his Four-Part Consorts, John Jenkins (1592–1678) parades his much-vaunted contrapuntal prowess that is marked by a fanatical devotion to the equality of four independent parts. Frequently turbulent and given to frenetic activity, this music charts the interactions of a band of like-minded spirits obsessed with lively struggle and restless soul-searching. The incessant peregrinations of Jenkins’s roving harmonies are heady stuff and make moments of calm and valediction all the more deserved and poignant. This recording brings to fruition Phantasm’s long-standing project to issue Jenkins’s complete consorts for four to six viols complemented by ‘Jenkins: Six-Part Consorts’and ‘Jenkins: Five-Part Consorts’ (both released by Linn). In over half of the four-part pieces, the viols are joined by organist Daniel Hyde whose sensitive shaping of original accompaniments on a fruity seventeenth-century-style instrument helps nurture Jenkins’s grandiose ambitions.

Phantasm brings its distinctively light, luminous and spectral sound to these busy tapestries, and the consort’s translucent textures are enriched in sundry pieces by the velvet warmth of a chamber organ. In the fantasies, the players’ lithe articulation propels the music forward with graceful energy, while the two pavans are beautifully poised – tableaux of stillness midst the repartee.

Phantasm have realised each separate emotional world impeccably, whether from fantasy to fantasy or when a new affect rolls in mid-piece...Surely both Jenkins and Mace would have approved.