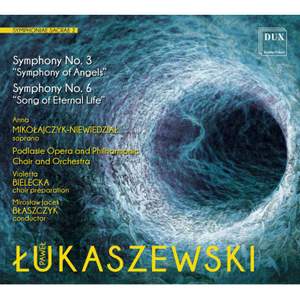 Two symphonies by Pawel Lukaszewski (born 1968) are released for the first time on a DUX record label CD.

These compositions are a continuation of the interests of Pawel Lukaszewski, composer, conductor and teacher, in religious music, of his passion deepened by the study of apocryphal literature and profound reflection on the nature of transcendence.

In the Symphony No. 3 'Symphony of Angels' from 2010 presented on the album, we will hear echoes referring to the tradition of early religious music, with its rich choral texture and a solo soprano part in Latin, enriched with the spectrum of the orchestra, exploring subtle, pastel tone colour. The Book of Enoch, the Apocrypha of the Old Testament, inspired the first movement of the composition, while the second is directly related to the reflection on angels, mysterious God's messengers, present in many world religions.

The Symphony No. 4 'Song of Eternity' from 2020 refers to the concept of time understood from the point of view of transcendence. The three movements of the composition depict different dimensions of time chronos, with its linear course, accompanying ordinary human activities, and the sacred dimension Kairos revealed, divine time, with its source in eternity. Kairos occupies the middle, central place in the three-movement structure of the piece, at the same time being its musical climax. Both pieces are performed by the Podlasie Opera and Philharmonic Choir and Orchestra under the baton of Miroslaw Jacek Blaszczyk, while the soprano part was performed by Anna Mikolajczyk-Niewiedzial.