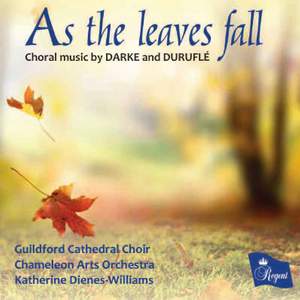 Pre-order, As the leaves fall

Darke: As the leaves fall

Darke: The Kingdom of God

Today, Harold Darke is known for a single work, the beautiful and well-loved Christmas carol, In the bleak midwinter. The two cantatas recorded here As the leaves fall and The Kingdom of God reveal for the first time a musical voice of great depth and consumate skill on a much larger canvas. In both works, a chorus and radiant soprano soloist – sung here by the young Hannah Dienes-Williams – are supported by luxurious post- Elgarian orchestration which envelops the listener in rich harmonies and colourful instrumental sonorities.

Faith and mysticism are at the heart of this disc and the Requiem – in the 1961 version for mezzo-soprano, choir, organ, and small orchestra – by Harold Darke’s slightly younger French contemporary, Maurice Duruflé, makes an apposite companion piece.

Guildford Cathedral Choir has established an enviable international reputation through its recordings, broadcasting and touring, as well as frequent concert appearances in the cathedral and elsewhere. Originally from New Zealand Katherine Dienes-Williams has been Director of Music of Guildford Cathedral since 2008, following appointments at Winchester Cathedral and College, Liverpool Metropolitan Cathedral, Norwich Cathedral, and St Mary’s Collegiate Church, Warwick. She is much demand as a choral conductor, solo organist, and choral and organ course leader.