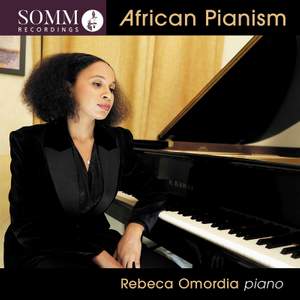 Volta Fantasy, otherwise free-flowing and melodic, is enhanced by a percussive undertone. This idea is taken further by Christian Onyeji, who transfers Nigerian drumming patterns to the piano;... — BBC Music Magazine, April 2022, 4 out of 5 stars More…

Volta Fantasy, otherwise free-flowing and melodic, is enhanced by a percussive undertone. This idea is taken further by Christian Onyeji, who transfers Nigerian drumming patterns to the piano; Omordia effectively turns the instrument into a piece of tuned percussion.

[Omordia] her commitment to this repertoire is palpable in her rhythmic control, her suave sense of melodic line, and her timbral sensitivity. Fine sound, and excellent notes by Robert Matthew-Walker. All around, a first-rate release.

one cannot escape a sense of gratitude to Omordia, whose musical curiosity and imagination, bolstered by an admirably versatile technique, bring us a bounty of largely unfamiliar yet richly rewarding music

This brilliantly curated and executed programme from the Nigerian-Romanian pianist is a real ear-opener, featuring works by seven African composers and encompassing a dazzling range of styles and pianistic techniques along the way. Christian Onyeji's Igbo Dance (translating traditional drumming techniques onto the keyboard) stands out.