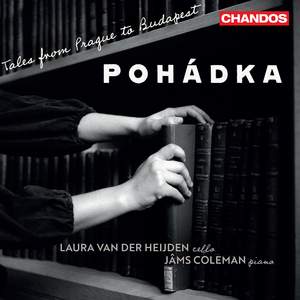 Pohádka: Tales From Prague To Budapest

The starting point for this delicious and distinctive Bohemian programme was Janácek’s Pohádka...Laura van der Heijden and Jâms Coleman unleash its power in this big-boned reading, with its hair-trigger... — BBC Music Magazine, March 2022, 4 out of 5 stars (Performance) / 5 out of 5 stars (Recording) More…

Kodály: Sonatina for Cello and Piano

The label début of the Exclusive Chandos Artist Laura van der Heijden explores the rich musical heritage of Bohemia. She was born in England to Dutch-Swiss parents, and her career highlights already include winning the BBC Young Musician competition (aged just fifteen), the Edison Klassiek Award 2018 (for her début album) and BBC Music Magazine’s Newcomer Award in 2019. Laura writes: ‘Jâms and I first met in 2017, when I was mesmerised by the sensitivity of his musicianship and the colours he managed to create on the piano. Our first concert together took place in the summer of 2018 and included Janáček’s Pohádka. Both of us felt incredibly drawn to this piece and also to Janáček’s musical language. One of the reasons we were particularly enamoured of Pohádka (a Czech word which loosely translates as ‘A Tale’) was the focus of the piece on storytelling and how that invited us to let our creativity and imagination flow. This is the common thread spun throughout the repertoire that we have selected for this album; all the pieces embody the notion of passing on ancient folk tales, tales which have lived amongst peoples and across lands for centuries.’

The starting point for this delicious and distinctive Bohemian programme was Janácek’s Pohádka...Laura van der Heijden and Jâms Coleman unleash its power in this big-boned reading, with its hair-trigger transitions from dreaming innocence to cataclysm.

As a creative concept, it is carried through convincingly. The players clearly share a tangible musical understanding and rapport, and catch Pohádka’s ambivalent quality very neatly.

Van der Heijden and Coleman are spirited and illuminating tour-guides on this musical journey 'from Prague To Budapest', bringing just the right blend of muscularity and lyricism to the sonatas by Kodály and Janáček, with plenty of grit in the sound and metaphorical dirt under the fingernails in the former's finale. Of the shorter works, Vítězslava Kaprálová's song Navzdy (published after her death at just 25, and adapted here by Van der Heijden) stands out for its shimmering beauty.