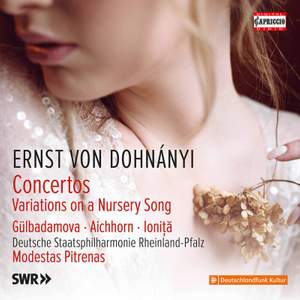 In all three concertos the solo playing is magnificent. Modestas Pitrenas and the orchestra accompany with enthusiasm, but ensemble is sometimes uncertain and the sound in some louder tuttis... — BBC Music Magazine, April 2022, 4 out of 5 stars (Performance) / 3 out of 5 stars (Recording) More…

Of all the works Ernst von Dohnányi wrote for the stage, only his ballet pantomime The Veil of Pierrette (Capriccio C5388) received any particular acclaim. His concert music, however, was received much more warmly. This sixth Capriccio volume of Dohnányi's late romantic, sensual music that is deeply rooted in the Austro-German classical tradition features three of his concertos. Apart from two piano concertos and two violin concertos, Dohnányi wrote three more, which are concertos in all but name: Variations on a Nursey Song (for piano and orchestra), Concertino (for harp and chamber orchestra), and Konzertstück (for cello and orchestra), the titles subtly hinting at their specific character.

In all three concertos the solo playing is magnificent. Modestas Pitrenas and the orchestra accompany with enthusiasm, but ensemble is sometimes uncertain and the sound in some louder tuttis is a touch brash.

A truly superb performance of this unjustly neglected and once-popular work [Variations On A Nursery Song]...All in all, Modestas Pitrėnas inspires orchestra and soloists alike on a disc that stands with the best.