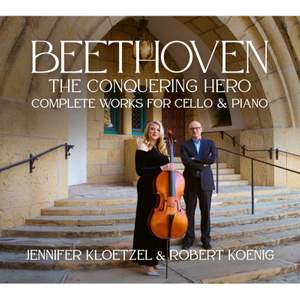 If only more cellists played like this – and at this level of ceaseless musicianship...And there is a true musical team at work here. Robert Koenig’s choice of a mellow-voiced Blüthner piano... — BBC Music Magazine, March 2022, 5 out of 5 stars More…

Jennifer Kloetzel's lifelong journey with the music of Beethoven reaches a career milestone with a tour de force recording of Beethoven's Complete Works for Cello and Piano.

Jennifer Kloetzel's lifelong journey with Beethoven began early: she was eight years old when her teacher placed the composer's second cello sonata on her music stand, opening the door to an odyssey of intrigue and, ultimately, obsession with the composer's music. Since then, rarely has a day passed without Beethoven being a part of Jennifer's life. She has studied and performed all of the composer's duos and trios. As founding cellist of the Cypress String Quartet, she spent 20 years rehearsing, performing, and recording the string quartets. Jennifer now arrives at a career milestone with this recording of Beethoven's Complete Works for Cello and Piano. Views vary as to what comprises Beethoven's "complete" works for cello and piano. Jennifer's discerning choice includes the five Sonatas for Cello and Piano, three sets of variations based on arias from Mozart's Die Zauberflte and Handel's Judas Maccabaeus and the Horn sonata for which the composer also wrote a cello part. Jennifer spares no attention to detail across the entire spectrum of this significant recording project. Her performing partner Robert Koenig plays on a 19th century Blthner concert grand piano. The illuminating liner notes are penned by Beethoven scholar William Meredith who boldly states, "if there were only the five cello sonatas of Beethoven left of all his music, these alone would have cemented his place in history." The recording was made in the stellar acoustic of Skywalker Sound. The 3CD set is lavishly packaged in a deluxe digipack. The title track, "The Conquering Hero" from the opening set of variations from Handel's Judas Maccabaeus evokes everything for Jennifer about Beethoven's music, coming from a place of triumph and joy.

A graduate of The Juilliard School and a Fulbright Scholar, cellist Jennifer Kloetzel has concertized throughout the United States, Europe and Asia as a soloist and chamber musician. A founding member of the San Francisco-based Cypress String Quartet, Kloetzel has performed at such renowned venues as Lincoln Center, the Kennedy Center for the Performing Arts, the Chautauqua Institute and the Ravinia Festival, the Lobkowicz Palaces in both Vienna and Prague, as well as prominent colleges and conservatories worldwide.

Grammy-nominated pianist Robert Koenig's career as a collaborative artist and chamber musician has taken him to many of the world's most important stages. His recordings include a GRAMMY- nominated CD of William Primrose's Transcriptions for Viola and Piano with violist Roberto Daz, as well as recordings for Decca, Cedille, Eroica, Ambassador, Centaur, and CRI.

"Mention must, however, be made of the cellist Jennifer Kloetzel, whose line in unfailingly rich and beautiful." -MusicWeb International (Beethoven: Late String Quartets / Cypress Quartet AV2356)

If only more cellists played like this – and at this level of ceaseless musicianship...And there is a true musical team at work here. Robert Koenig’s choice of a mellow-voiced Blüthner piano for his alert accompanying connects exactly with Kloetzel’s artistry.

in my book Jennifer Kloetzel and Robert Koenig are in their way every bit as pleasing as Yo-Yo Ma and Emanuel Ax. It’s just that they make their points more quietly and sweetly.