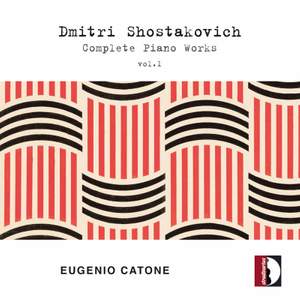 No. 1, March in C Major. Allegretto

No. 2, Waltz in C Major. Andantino

No. 3, Polka in C Major. Allegretto

Shostakovich: Funeral March in Memory of the Fallen Heroes of the Revolution

Shostakovich: In the Forest

No. 2 in A Minor. Allegretto

No. 5 in D Major. Allegro vivace

No. 6 in B Minor. Allegretto

No. 8 in F-Sharp Minor. Allegretto

No. 15 in D-Flat Major. Allegretto

No. 20 in C Minor. Allegretto furioso

Dmitrij Dmitrievič Shostakovich was one of the most influential, praised and widely performed composers of the twentieth century: his unmistakable style has left an indeli-ble mark on the aesthetic taste of the modern listener and on the DNA of the contempo-rary orchestra. Nevertheless, up to this day, his piano works have been rarely played by performers and listened to by the public, almost obscured by the exceptional nature of his extensive chamber and symphonic production. Considering his outstanding ease of writing and well-proven ability to compose music under all kinds of circumstances – even unfavorable ones –, Shostakovich’s piano pro-duction for piano appears relatively small and, above all, sporadic. These pages are not less extraordinary because of that. On the contrary, many of them show a degree of am-bition and depth of purpose that are not second to those of his chamber and symphonic masterpieces.